On June 10, 2021, construction and finishing materials retailer Baucenter opened its first hypermarket near Moscow in the city of Pushkino. Since January 2019, the AsstrA corporate group has been transporting home improvement goods and garden equipment to the company's outlets in Kaliningrad, Krasnodar, Novorossiysk, and Omsk. Since November 2020, AsstrA has also been handling import deliveries of more than 200 containers for Baucenter’s first hypermarket in the Moscow region.

The goods are consolidated in the city of Pushkino, where Baucenter operates a warehouse supporting its retail network. From this warehouse, goods are distributed to retail outlets in Kaliningrad, Krasnodar, Novorossiysk, Omsk, as well as to the new hypermarket in Pushkino itself.

The goods are dispatched mainly via multimodal transportation by sea and road. AsstrA typically ships the retailer's cargo in 40-foot and 20-foot containers with load capacities of up to 25 tons. To meet Baucenter’s specific requirements, AsstrA works with a contractor whose fleet includes vehicles capable of simultaneously transporting two such containers. 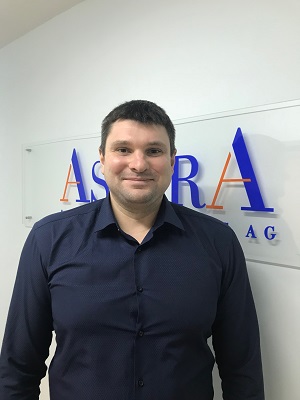 "We congratulate our partner on the opening their first retail outlet in the Moscow region. We are proud to prove ourselves as a reliable logistics provider ready to support the regional expansion of customers like Baucenter. Our close relationship with one of the largest DIY retailers in Russia indicates our trustworthiness and motivates us to continue improving the quality of services we deliver,” says Soslan Dzugkoev, Sales Specialist at AsstrA. From January to July 2021, we generated 700 thousand euros in turnover with Baucenter. By the end of 2021, we aim to reach or even exceed 1 million euros."

During the initial stages of partnership with Baucenter’s network of hypermarkets, AsstrA was shipping approximately 150 containers of goods annually. From June 2020 to July 2021, the logistics provider shipped more than 410 containers for the retailer. By the end of 2021, AsstrA aims to grow this volume by 75% as Baucenter continues to expand its network and build its inventory ahead of a potential complications caused by the spread of the pandemic.